Ranger is now a Junior Hunter, after passing four legs over two days out in the Finger Lakes area a couple weeks ago. We are so proud of him, and thankful to his breeder, Alan Burkhart, who trained and ran him. He also earned a NAVHDA title for Natural Ability. Not as good a showing as his Hunter title, but he passed, and we are all proud of him, and plan on continuing his field training, as well as obedience. He is a great dog, with great potentials.

Seren’s Cruz’n For A Good Time RN BN earned his 2nd and 3rd legs for his CD at the SOTC trial in January. Cruz improved with each of the four trials we entered (I did too) and I am very proud of my boy. Seeing his little nub wag so furiously assures me he is happy too!

Thanks To Bev Bulson!  I took Makya and Jazz to their first AKC agility trial at the Thanksgiving Classic and Makya got First Place with his first Q in Novice preferred JWW. He also got Second Place both Friday and Saturday in Novice preferred Standard.

Also both boys had perfect scores of 100 on Saturday for the standard runs!!!! 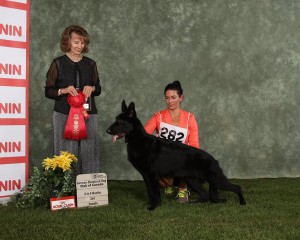 We went to the Kitchener Memorial Auditorium in Ontario for the German Shepherd Dog Club of Canada Inc.

Thank you to judge Donna Conod for seeing Sochi’s potential. Thank you to her breeder for showing Sochi to a 2nd place.

Very proud of my girl, Sochi.

Shetland Sheepdog HMS Mohawk Dreamboat CDX, RN, “Beau” owned by Marianne Szuberla, blazed a trail from CD to CDX in seven shows this spring. He earned is CD in March at the Sports Dome in Milton NY, with 3 first place finishes including a High in Trial.

Beau earned his CDX in two weekends, winning his class each time with scores of 196, 196, and 191.5. He got his first two legs in May at Albany Obedience Club and finished his title June 7th at Syracuse Obedience Training Club. For good measure he got a “bumper” leg in Syracuse on Sunday with another first place and a score of 196.5.

Beau’s scores have qualified him to compete in the AKC Obedience Classic in December.

Deb Halley and All American Stuart earned their CD at Syracuse.